Important news:  Both the "upper" restrooms in Ravenna Park were open.  I didn't have my newspaper with me, so didn't take pictures.  But there are now open park restrooms sort of near the U-District.  I found no other changes in the parks' plumbing - neither Cowen nor Ravenna has a running water fountain, Cowen's restrooms are still closed (and in a recent page I boneheadedly forgot that they do have explanatory signs on their doors), and Ravenna's lower men's room too.

The block of Ravenna Boulevard between 15th Ave and University Way NE, also known as Olga Park, was swept this morning.  A camper there was murdered by a visitor earlier this week, and so the entire camp was punished.  This is, of course, biblically correct, dear Diary, for as Numbers 14:18 says:  "and by no means clearing the guilty, visiting the iniquity of the fathers upon the children unto the third and fourth generation."  Imagine how much better a place Seattle would be if every neighbourhood where anyone was murdered were evacuated and levelled.  We might still have five buildings standing in town, who knows?

At any rate, this meant that, given my policy against showing you photos of tents, that today was my first chance to take landscape photos of Olga Park. 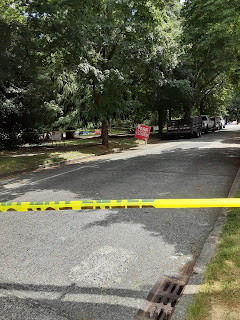 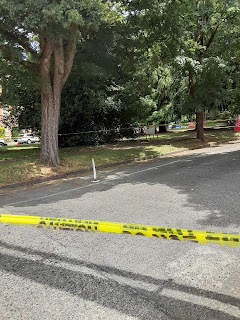 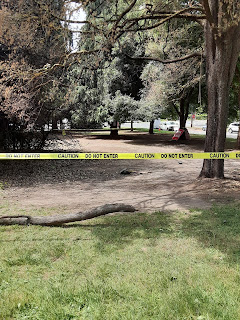 I found a notice proper in form, though it didn't meet the 72-hour standard that was once legally required: 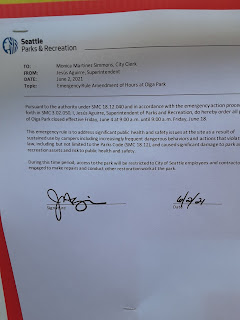 There was also this confusing declaration: 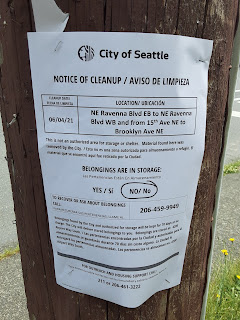 Given that the parks department is now allotting itself two weeks to do nothing, presumably because the one week in which they did nothing at Albert Davis Park hadn't been enough, they did a really thorough job of putting up closure signage: 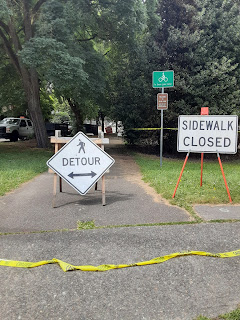 However, what I witnessed, and in fact participated in, wasn't the sweep of Olga Park, but of Cowen Park.

I found a couple of young women with stacks of pizzas and other stuff set up across 15th Ave NE from where I took the picture just above.  They told me Cowen Park was being swept as we spoke.  Since I'd never actually seen a sweep done, I figured I owed it to you, dear Diary, to find out what they're like.

What I found was a rather odd confrontation.  A single tent stood in one of the awkward corners Cowen Park has many of.  A man stood in front of it.  Surrounding him on three sides were many employees of the parks department.  And on what passes for a sidewalk at the edge of Cowen Park - that is, a dirt path with some edgy gravel here and there - stood a bunch of people yelling at the parks department employees.

The man who was in front of that tent is black, as are quite a few of the parks department employees, including both of those I'll quote to you, dear Diary, from memory.  There may have been a white parks department employee or two there, but I didn't notice them; there were people of various other races.  Essentially all the protestors were white; mostly young women, and a few who might have been men, plus one man at least my age.  He and one less young woman, who turned out herself to be homeless (she claimed to have seen tents slashed at Albert Davis Park, where she was living May 6), were by far the loudest.  There was a guy on a bicycle who struck me as not really belonging to any of these groups, but who seemed to have some sort of rapport with the man in front of the tent; he's also black, and for all I know he could be anything from a relative to a fellow homeless man (though if so, he was travelling awfully light) to a dealer to a social worker.

For a while everyone focused on each other, and a weird sort of argument.  Some of the protestors yelled, others, including me, made caustic but quieter remarks.  The parks department employees said what they could, quoting law, saying they were just doing their jobs (and that bit of World War II folklore has certainly not died out from among the youth of today, unfortunately for people just doing their jobs everywhere...).  Since the louder people were the angriest, and had trouble restraining their movements, things escalated, giving the parks employees all the excuse they needed to call the police, and when those arrived, the whole confrontation collapsed.

Two episodes in the confrontation are worth quoting.  At one point a parks department employee apologised to the homeless man.  Apparently this employee had advised him, while sweeping Olga Park, that Cowen Park might be a safe place to go, and now regretted giving this advice.

At another point, when one of the protestors asked where the man should go next, a parks department employe mentioned that there are mountains all around Seattle with plenty of places to camp.  I reiterate that the person who said this boneheaded thing is just as black as the foolishly compassionate colleague, and as the homeless man himself.

Anyway, on the police's arrival, several of the quieter young women started giving orders which various people obeyed, and next thing I knew I was one of about half a dozen people lifting the tent before it'd been emptied.  Basically, the protestors and their hangers-on (including me) did the sweep for the parks department.  They certainly did check our work, but we left the spot as clean as they would have.

Ironically, the next stop was ... Ravenna Boulevard, halfway across the street.  One block from Olga Park.  The protestors had hired a rental van, which arrived reasonably soon, but the homeless man had trouble deciding what to do.  By the time I left he'd pretty much decided to spend the night there on Ravenna Boulevard, and maybe the next day move to the doorway of a vacant building across the street.  Last time I saw him, a few hours later, he was still there.

I followed my usual rules, dear Diary:  I tried not to photograph any tents or people, and will not show you my failures.  Here's what I did photograph:

First, the vast threat this one man's tent posed to the public's enjoyment of Cowen Park: 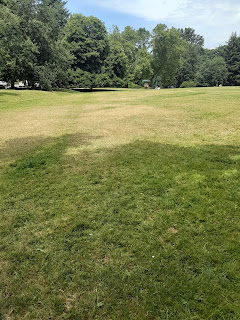 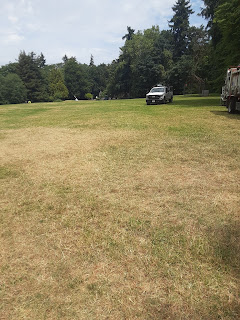 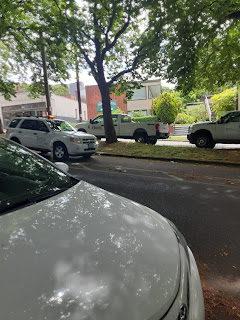 Really, I think there were more like ten of them.  The group I spoke with later was four men, and was definitely not even close to all.

So yes, obviously one tent would've made it impossible for anyone else to use Cowen Park.  And of course someone just swept has no right to pitch a tent where the sweepers can see.  After all, sweeps are like bills of attainder, which everyone knows are constitutional somewhere:  they attach to this man, and to his descendants unto the third generation.  Little details like notice or legal authority don't matter compared to that.

Anyway, that's the threat from which these valiant parks department employees spared the neighbours of Cowen Park.  I put off writing this page, dear Diary, long enough to skim the books of Numbers and of Joshua, looking for something explicitly saying that evildoers should be hounded from door to door until slain, or some such, an explicit declaration that those not of the tribe must all die.  I didn't find one; I'm just not as biblically literate as I thought I was.  Oddly, however, in other books which some people consider biblical, one finds other things, for example this, from Matthew 25: 31-40:

31 When the Son of man shall come in his glory, and all the holy angels with him, then shall he sit upon the throne of his glory:

32 And before him shall be gathered all nations: and he shall separate them one from another, as a shepherd divideth his sheep from the goats:

33 And he shall set the sheep on his right hand, but the goats on the left.

34 Then shall the King say unto them on his right hand, Come, ye blessed of my Father, inherit the kingdom prepared for you from the foundation of the world:

37 Then shall the righteous answer him, saying, Lord, when saw we thee an hungred, and fed thee? or thirsty, and gave thee drink?

38 When saw we thee a stranger, and took thee in? or naked, and clothed thee?

39 Or when saw we thee sick, or in prison, and came unto thee?

Posted by Joe Bernstein at 8:39 PM